The Punisher logo is a common symbol seen on T-shirts and hats, and even bumper stickers and wheel covers. But other than Marvel’s popular character, The Punisher, do you know what the symbol means and why soldiers in the U.S. Military love it?

Check out our Punisher Clothing

Man has been using skulls throughout history to intimidate enemies, to warn of danger, to beckon the morally questionable, and to mark our death vaults.

It’s hard not to react when viewing a human skull. After all, it’s a direct confrontation of our own mortality. The only way to see a skull is after death and after decomposition. That’s pretty profound. Our depictions of Death, or the Grim Reaper, always include a skeleton. Interestingly enough, the Grim Reaper also symbolizes a kind of wisdom, spooky though it may be. Death knows when and how our lives will end. It may be a grudging respect at best, but the skull’s representation of Death denotes a sense of superior judgement.

In ancient cultures around the globe, elders elongated the skulls of certain infants, creating an impressive display in life and an extreme skull after death. The reasons for cranial elongation are since lost to time, but we can see that even tens of thousands of years ago, man placed significance on the human skull.

Cunning use of skulls catapulted some of the greatest military machines to legendary status. Ancient Roman head hunters would gather the heads of fallen enemies and gladiators and display them in open pits to strike terror in their enemies and the local populace. The Incas sacrificed the leaders of their foes and then turned their skulls into elaborate drinking cups. Genghis Khan built towers made with the skulls of his enemies. 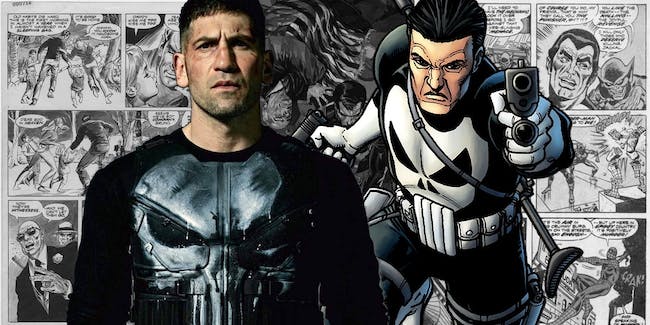 The skull continues to pop up in modern culture, as well. Fast forward to 1974, when Marvel Comics first introduced the Punisher in The Amazing Spider Man, #129. Written by Gerry Conway and with help from Stan Lee, we met Frank Castle, a Marine veteran with Special Forces training. The mob murdered Castle’s family in Central Park after they witnessed an execution, launching Frank into a full-fledged vigilante hell bent on killing criminals where he finds them. Frank decorates a black shirt with a large modified white skull with elongated teeth emblazoned on the front of the shirt.

Since his introduction, The Punisher continues as one of Marvel’s most popular heroes. Multiple comics, four movies, and a current Netflix series showcase Frank Castle’s strict code of right and wrong. Fans love Frank Castle. Balanced by a sympathetic backstory, his unabashed proclivity to use violence serves to strengthen his moral code. Frank didn’t start out as a bad guy, and he didn’t ask to be a hero, but he understands that he had to step up to defend the innocent.

The Punisher isn’t a superhero. He’s a straight-up hero. A man of flesh and blood who uses the tools he knows, the ones he trained to handle while in the Special Forces. He uses handguns, sniper rifles, knives, grenades, and even his own bare hands if he must to wreak justice on criminals.

Since Colonial times, the American military has used skull imagery to adorn their equipment, and that tradition continues today with incorporation of the Punisher skull. Navy SEAL Team 3 sniper Chris Kyle was one of many SEALS who painted the Punisher symbol on his weapon and vehicle. Chris Kyle loved the Punisher emblem so much that he used it in the logo for the company he started after he left the service.

The Punisher symbol also signifies brotherhood. Frank Castle’s life is colored by his time in the service. His military code dictates accountability and responsibility, and that’s only the beginning of what drives him. Guided by strength, perseverance, tenacity, and decisiveness, Castle’s dedication to freedom and justice draws parallels to many who serve in the military.

The Punisher is a Common Soldier

Castle’s ambivalent relationship with the military parallels the experience of many who have served. Juxtaposed against his hatred of immoral bureaucrats who send naïve soldiers into war, Frank’s love of fellow brother-warriors helped him cope with the bitter realities of the service, and for the tragic realities he faced when he returned home. The Punisher logo service as a kind of bond of brotherhood for those in service. A reminder that those who serve are not alone, that they stand beside brothers and sisters in service.

Everyone’s Got an Opinion About the Punisher

Yes, there has been criticism about using the Punisher logo, especially for law enforcement agencies. Police forces in New York and Kentucky put the Punisher logo on their squad cars and they’ve gotten a lot of reaction to it. The stated reason for the logo addition was to celebrate the Blue Lives Matter movement, which advocates for the safety of police. Critics say the emblem is the logo of a criminal, a vigilante who operates outside the law, and just not an appropriate symbol for the police to use. Most officers disagree, stating that the Punisher logo serves as a warning to criminals that if they’re committing violent acts, the police are coming for them.

Whether you think the Punisher logo is totally badass or a totally bad idea, it’s here for the long run. Frank Castle settles wrongs. Ask any cop or service member who’s seen bad guys walk, and you can understand the Punisher’s appeal.